Venturing out beyond these studio walls...


On the morning of June 19, 2008, approximately 35 people from The University of Findlay's Mazza Musem (the world's largest museum devoted to literacy and the art of children's picture books) stepped off a very large touring bus in front of my house, crammed themselves into my humble studio, and listened to my articulations on the subject of telling a story visually… illustrating children’s books. Something I’m very passionate about. Good thing they didn’t ask about my views on deep dish versus thin crust, or they’d still be here… I am, after all, a Chicago boy. 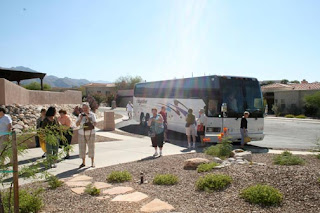 I’ll never forget, during the course of their visit, being asked to say a few words in welcoming them to my home and studio. That was their first mistake. I don’t do “few words,” just ask my kids. (Incidentally, their second mistake was having me sign every copy of Grandpa’s Little One, Junk Man’s Daughter, The Legend of St. Nicholas, and The Day I Could Fly, not to mention a few of my earlier books that I can’t recall at the moment, that I had in my inventory... I love to sign books.) Can you say rock star? Which of course was my first passion in life. More on that later… 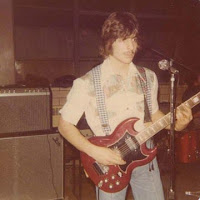 Note the hair
But, to my delight, these wonderful, picture-book people gathered in my living room for what could have easily turned into days, had I not run out of ways to say the same thing over and over at least 5 or 6 times. If at first you don’t succeed re-state your point…that’s my motto.
Please understand, the majority of my work happens inside of my head while sitting at a drawing table or in front of a computer within the four walls of my modest, yet comfortable, working space, 7 days a week. I don’t even want to know how many dog-years I've racked up in my studio since graduating art school. 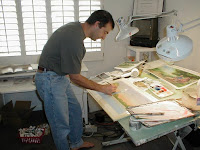 Note the bare feet
Therefore, when a large group of people who are extremely interested in what, and how, I do what I do, travel over 1,000 miles just to meet and hear me talk about my passion for illustrating and writing children’s books… I will answer the door, believe me. “Come on in, have a seat, there’s plenty of room. Let me tell you about the time when I was 7 years old, fell out of a tree, and when I finally came to, decided to devote my life to the writing and illustrating of children’s picture books. 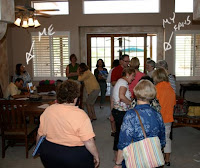 Note the long line
Well, this fine group of people from the Mazza Museum invited me, right then and there, to travel to the University of Findlay and speak at their 2010 Mazza Summer Conference. How did they know I had more to say on the subject of writing and illustrating children’s picture books? These are very smart people, folks!
The whole thing makes me smile. 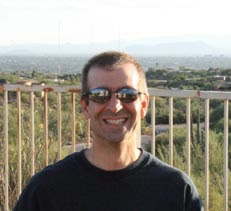 Note the smile
Posted by Guy Porfirio at 7:38 PM No comments:

The half-life of a great idea...

Did you ever wonder what happens to unfinished manuscripts? They get put in the darkest part of your brain, buried in an old steamer trunk under a mountain of useless information like your old bicycle lock combination from 3rd grade, secret Batman hand shake, and the log-in password to that new facebook account you set up last week. Go figure.  There they sit, hoping against hope that someday they get the go-ahead to move on to the next plane, or drift away and evaporate forever. It's so sad. Hang in there story of mine, I'll break you out of that place as soon as I can.
A great story trumps a pretty good one every time, and I can always tell when I have a pretty good story. There's just a little something about it that's not quite right. It's like a bump in the road that you've become accustomed to after running over it so many times; you almost forget that it's there, but there it is. Same with an illustration. I could swear that it's the second Mona Lisa... except for that, thing, over there—that, kind of disconnected thought that doesn't really make any sense... Maybe no one will notice. Or maybe I'm just over thinking it. Yeah, right. It you see it, everyone sees it. It's an all or nothing game folks. It either works, or it's just a pretty good rough draft. 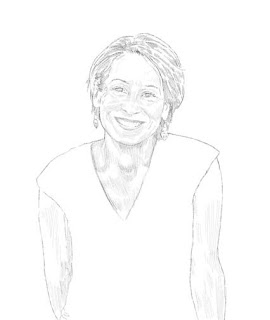 So therefore, I decided to ignore my little writing obstruction (if you ignore it, it'll go away) by painting a portrait. One of my favorite things to do. I've told you how much I enjoy telling a story with my artwork... Well, this is the same thing. The story is in the facial expression. Here's my sketch.
Posted by Guy Porfirio at 3:17 PM 1 comment:

Guy Porfirio
I've been an illustrator for over 25 years and work in both the advertising and publishing markets. Even though those two venues are quite different, my approach remains the same. I'm telling a story visually. 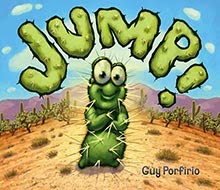